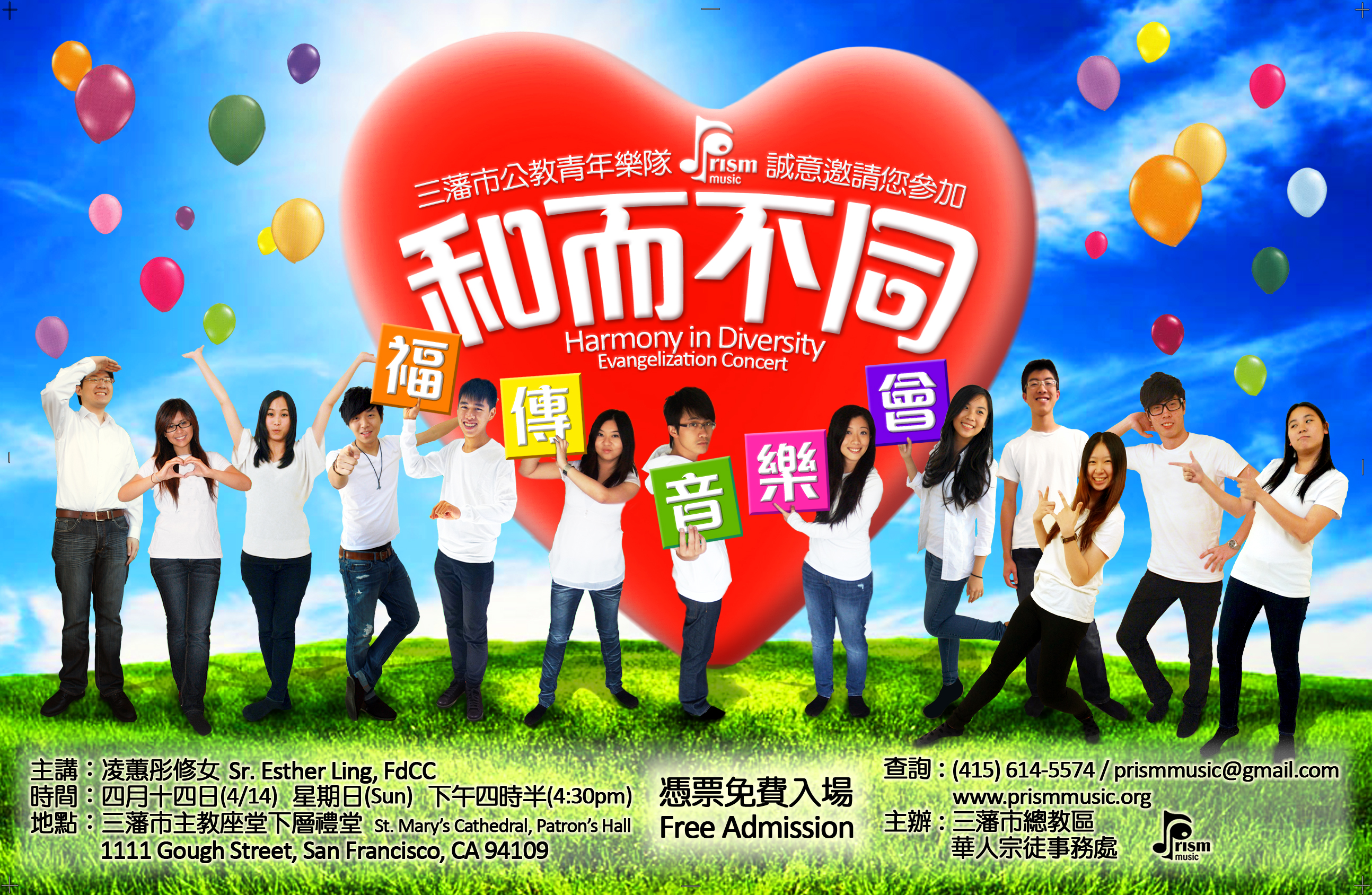 On April 14th, 2013, at the performance hall of the St. Mary Cathedral in San Francisco, Prism performed their “Harmony in Diversity Evangelization Concert”. Prism’s members would like to thank all the friends and families who attended the concert for their continuous and endless support. For it was only because of their participation and support that made this concert not only possible, but also extremely successful.

In preparation for this concert, Prism had begun practicing about a year ago. Due to an influx of new members at that time, everyone had been worried that there would not be enough time to not only practice and memorize the songs, but also establish friendship between the members. Thankfully, a miracle had appeared and allowed everyone to somehow be available to meet and practice every week. Therefore, under God’s watch, we were able to smoothly pass through the hurdles and finish this preparing for this concert.

There was this one time at the first meeting, when all the new members were testing and practicing their singing voices for Agatha, that we encountered our first difficulty. It was the first time for all of the new members to actually be in contact with ensemble music, but luckily, under Agatha and Louisa’s expertise and guidance, we were able to achieve true “Harmony in Diversity”! Now that we think about it, the several tough weeks of practice prior to the concert was really worth it.

On the day of the performance, we arrived at the cathedral at ten o’clock. Under a fierce schedule, we did several run-throughs of the music and skits to ensure that we wouldn’t make any mistakes. At about 5 o’clock, each of the members started walking up onto the stage, and under the glow of the stage lights, we officially started our concert. First, we started off with a fun and rhythmic song called “You are the Way”, which really brought up the crowd’s spirits. Then, we continued with our theme song for the eponymously named concert, “Harmony in Diversity”. This song’s origin came from the fact that no matter what kind of backgrounds we came from, what burdens or responsibilities we bore, and where we were in life, we still had God’s love to teach us how to peacefully harmonize with others. This exactly pinpointed at our own circumstances, since we all differed in our occupations; some students, others already working, yet we still came together as Prism to sing in evangelization for God.

This time, the concert not only included music, but also had skits. Through our youngest member, Allyson, we showed that people should not only be humble, but also be peaceful in their associations with people, while spreading the Gospel. The two stories were an expression of our two songs, “Pharisees” and “Roots” and the beautiful songs inspired an incredible round of applause. At the end of the silent skit, Allyson gathered all the members, and together, with the deacon, they put their various handmade cardboard puzzle pieces together in order to create a large complete heart, thus once again, bringing out the “Harmony in Diversity” theme.

Later on, in the form of interesting stories, the deacon gave us an insightful preach about “Harmony in Diversity” and how to achieve it. Finally, after having the deacon lead us into a prayer, the audience were able to participate by writing prayers on little cards to exchange with the people around them. After which, we ended with the Lord’s Prayer. In terms of music, we also had two very upbeat and fun songs called “Walk with Christ” and “Evidence of Love” that the audience danced to. And bringing the joyous concert to an end was our balloon curtain. With our hearts filled with love, it was hard for any of us to want to leave the stage. But knowing that these past 6 months were not practiced in vain, we really felt that we had finally complete this work of evangelization, and we descended the stage to join our loved ones in our mission to show “Harmony in Diversity”.