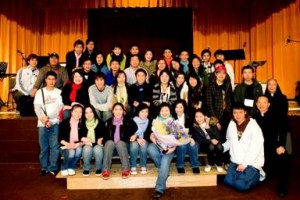 
Musical Journey “Step Forward” Catholic Evangelization Concert was carried out successfully on February 3, 2007. Thank you for supporting Prism in all ways. This was the first time Prism to have their own concert since they established. No matter in program flow, music arrangement, and combines with the band are all new attempts. We have spent lots of time and thoughts in arranging and practicing. To prepare for the concert, everybody practices very hard and hope that they can transmit God’s word successfully through their performances. But the frequent rehearsals have made everybody to feel tired, tense and the restless mood also lived along with it. Luckily, we have Jesus Christ among us, and transformed our hearts. Through many disorganized rehearsal at the beginning, to major improved rehearsals at last, singers were still very nervous. However, the performance turned out to be extraordinarily successful, and the audiences were very involved in the concert’s atmosphere. We then understood evangelization work could really bring peace and happiness to everybody. To us, the concert have also deepened our beliefs on our music journey, and all the hard work was worthwhile.
The grand opening for the musical journey begins with the gentle and delightful acappella. Then follow by a rock and roll style of music to bring out “Come, Praise God!”. We have prepared three well known Praise and Worship songs to praise God, and that shows people how lively we are as part of the youth ministry, and we have even invited all of the audiences to join us in singing to bring out a warmer atmosphere.

Then, emcee helped us introduced our special guest – Father Chung Dan Li to come between us. Along with the music at the background, we want audiences to know what is Trinity in God. In the program “ Father… love”, we have combined a short video, bible verses, soothing music and Father’s talk to introduce our God: the creator on earth. Then, Father introduced God’s son in the next program, “Jesus light”. Father Chung hosted a Catholic ceremony – “The ceremony of light”(where usually held during Easter), by using light to symbolize that the God who sacrifice his son to saves us criminals. When we started to sing our psalms peacefully and quietly, all the candlelight in the audience started to light up. Then everybody held their small candlelight and gently wave them, just like millions of stars shining in the dark sky, and created the idea of how Jesus Christ came to earth, like a bright light shining in the dark. Our final program in the concert was “Holy Spirit has arrived”. Father Chung first explained the significance of Holy Spirit, then he lead the audience with prayer and singing to pray for Holy Spirit’s presence into our hearts. So that we can have the power and courage to step forward, by using action to spread the Gospel’s good news to the rest of the world.

Since this was Prism’s first concert since established; members were not very familiar with each other, therefore, many miscommunications happened during preparation, and created lots of mistakes and misunderstandings. But because of this reason, we have also benefit a lot from these experiences. Whether it was on our friendship, on our music, or on our spiritual path, we have made a big step forward. Under God’s leadership, we’ve learned that music and beliefs are mutually correlated. By using our gifts and creativity, we could spread his word of love, and learned how to communicate better between people. This concert’s intention also tied with the Prism’s goal and mission.

We cherish all the things we’ve learned, practices, and all the time we spent in preparing and performing in the past few months. We wish that in the up coming days, we could continue to spread God’s light with our strength, to give heat and most of all to use music and spread to every part of the world.